On Saturday, 11th July 2020, we were successful in filling the tournament with 1,09,000 unique players playing at the same time during the “Saturday Bumper Cash” tournament. This flagship tournament takes place every Saturday at 4 PM IST on RummyCulture, whose headquarters are situated in Bangalore, India. Registration for this tournament starts at 10 AM IST on the day of the tournament and ends 10 mins before the tournament starts (3:50 PM IST). 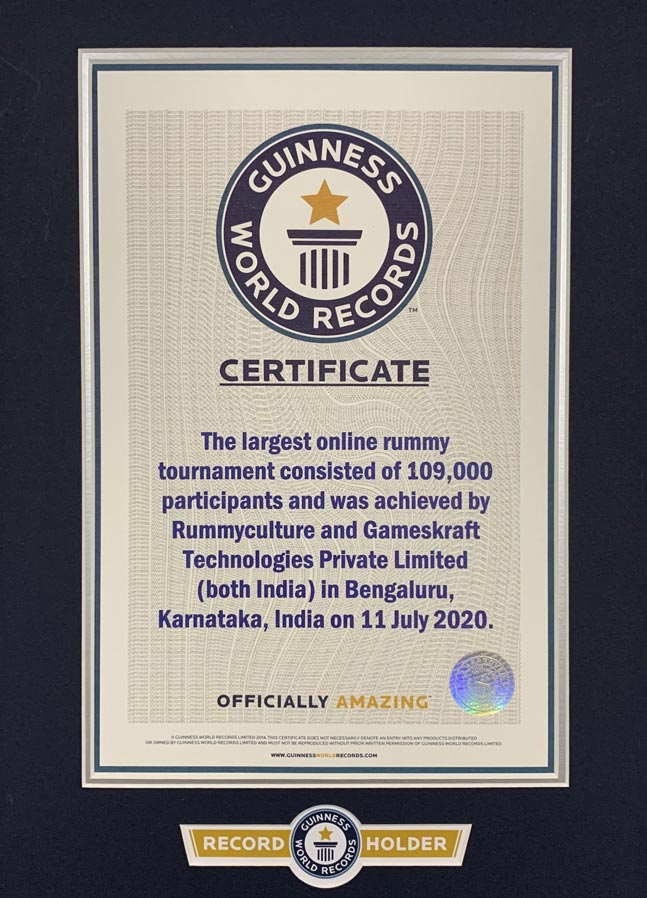 The “Saturday Bumper Cash” tournament is free to enter, but the rewards are amazing! The total Prize Pool for this tournament is ₹12,00,000. While there is a minimum guaranteed prize of ₹8 for all, the First Prize winner takes home ₹1,00,000 after winning through 7 rounds and 41 Deals in all.

Once we decided to attempt the record for the “Largest Online Rummy Tournament” ever in the world, our teams began building on their capabilities for the last few months. We made our platform ready to host at least 1,09,000 players at the same time. We started out with 15,000 players in September 2019 and scaled it up to 1,09,000 players on 11 July 2020.

Guinness World Records officially certified RummyCulture’s “Saturday Bumper Cash” tournament of 11th July 2020 as the “Largest Online Rummy Tournament” ever in the world. This is an amazing achievement as no other platform has successfully attempted to host an online rummy tournament with more than 1 Lakh players at the same time.